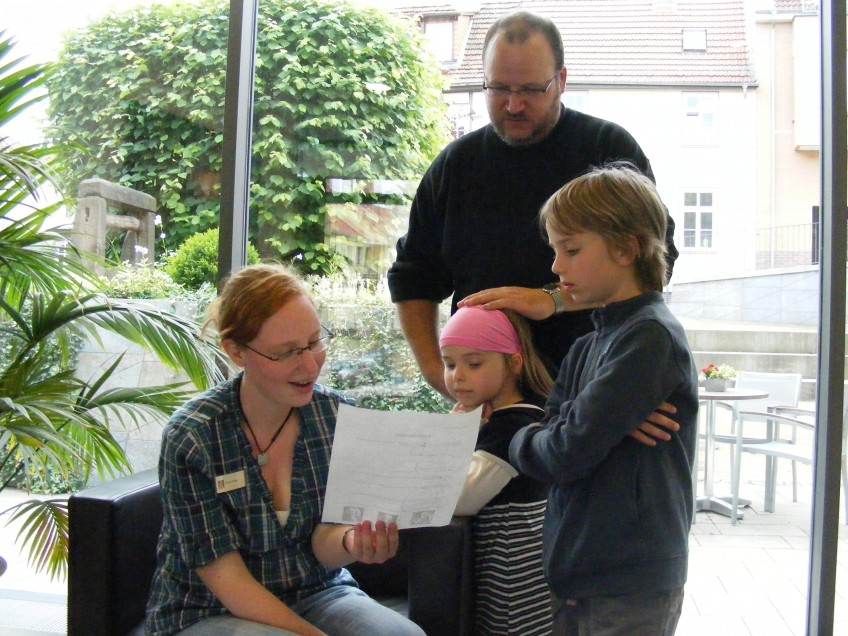 Can we also come along earlier/later?
Group visits are also possible before 10 a.m. or after 6 p.m. Please contact us.

What language is the exhibition in?
Everything is in German and English, including the lectures in the instrument hall. Guided tours can also be booked in French. There are printed guides to the museum in German, English, French and Japanese.

Where can I park my car / my coach / my bicycle?
There is a municipal car park with parking for cars and 8 coaches outside the building (parking charges apply). There are cycle stands in front of the building.

Can walking-impaired people experience the Bachhaus?
Yes. The new building is completely accessible via a lift. Wheelchair users can access the historical instrument hall via wooden ramps and can enjoy the hourly Bach concerts there. The residential rooms on the first floor of the old Bach house are unfortunately not accessible by wheelchair.

What is available for visually impaired people?
People with a visual impairment can buy or borrow a museum guide in Braille.

Do we need to book beforehand?
We recommend booking for groups, because we promise all our visitors a short live concert in the historical instrument hall, which only has seating for 63 – so we need to coordinate sometimes.

How often are the instrumental performances?
The short concerts take place at least once every hour – or every half hour if we are expecting a lot of visitors. This is why we ask groups to book beforehand.

How much time should I allow?
We recommend at least 60 minutes. The short concert lasts about 20-25 minutes, and so the time soon passes.

What happens if I don’t finish by 6 p.m.?
Don’t worry. In the evening, you can have your ticket stamped at the ticket desk, which allows you then to come back the next day.

Am I allowed to photograph and film in the Museum?
Yes, as much as you want – for private purposes. For all other purposes, you must request a photo permit (free of charge), which you can obtain from the ticket desk.

Are we allowed to bring our dog in with us?
There are three large dog boxes by the entrance, which you may use free of charge. Dogs are unfortunately not allowed in the Museum (except for guide dogs).

How old is the Bachhaus?
According to a dendro-chronological examination of the beams that was conducted in 2006, the Bachhaus consists of two buildings, built in 1456 and 1458 and linked in around 1600. This means the Bachhaus – together with the house at Rittergasse 11, immediately behind it – is the oldest remaining residential building in Eisenach.

Is it really the house where Bach was born?
No – or at any rate, it is very doubtful. The Bach biographer Carl Hermann Bitter identified it as Bach’s birthplace in 1857 on the basis of an oral tradition. The plaque was affixed in 1868 and the Museum opened in 1907. 21 years later it was found that at the time of Bach’s birth, Bach’s father was paying taxes on a site in “Fleischgass”, which probably means today’s Lutherstr. 35 about 100 metres from the Bachhaus. So the house where Bach was born stood probably there (the building was demolished in the 18th century).

So did the Bachhaus originally have nothing to do at all with Bach?
Members of the Eisenach branch of the Bach family lived here from 1746 to 1779. Bach’s son Carl Philipp Emanuel probably visited the Bachhaus when he was in Eisenach in 1754 for the baptism of a son of this family. Directly behind the Bachhaus there also stands the first residence of Bach’s father Ambrosius, where he lived with his young wife from 1671 to 1674 after he left Erfurt when he was appointed Director of the Eisenach Town Musicians.

Did Bach ever come back to Eisenach after his childhood?
Yes. Bach was born in Eisenach in 1685. After the death of his mother in 1694 and his father in 1695, he left Eisenach in the early summer of 1695 and moved to Ohrdruf, 40 km away, where his older brother Johann Christoph was organist. Bach was in Eisenach again in 1732, accompanied by his second wife Anna Magdalena, on the way to an organ inspection in Kassel. He probably came to Eisenach on other occasions, such as the burial of his famous uncle, the organist Johann Christoph Bach on 2 April 1703, or between 1708 and 1712, when his friend Georg Philipp Telemann was the Court Kapellmeister in Eisenach.

How many hours of Bach’s music can we hear in the Bachhaus?
Firstly, 20-25 minutes of live music in the instrument hall. If you listen to all the audio samples and watch all the films in the “Walkable Composition”, you’ll add another 2½ hours. (This does not include the audio stations in special exhibitions.)

Are there still musical instruments on which Bach played?
Yes: The organ in the Bach Church in Arnstadt, for example, or the one in the city church of St Wenzel in Naumburg, or in the Altenburg Palace church. In the Bachhaus, in the “Walkable Composition”, we have the manual of an organ that Bach played regularly during his time as organist in Mühlhausen. And it is perfectly possible that Bach was also familiar with the Thuringian positive organ in the Bachhaus instrument hall, which was built in c. 1650: It comes from the village of Kleinschwabhausen, 10 km from Weimar, where Bach was Court Organist from 1708 to 1717.

Do you also have a Bach trumpet?
Yes. It was owned by Ludwig Güttler and is on display in the “How We Play Bach” section in the new Bachhaus building.

Why isn’t there a catalogue for every exhibition?
We are a music museum – it would be difficult to tell people about much of our content without audio stations and multimedia elements. (Imagine an exibition about a famous painter that only displays brushes and canvasses!) If you need texts for teaching, for example, we would be happy to send them to you.

What other museums contain information about Bach?
The Arnstadt Castle Museum has a large Bach exhibition. Bach’s ancestors are the focus in the Bach-Stammhaus Wechmar. In 2019, a multimedia room dedicated to Bach was opened at the Weimar Bastille, to commemorate his position in Weimar from 1708-1717. In the Castle in Cöthen there is an exhibition about Bach’s time as the Court Kapellmeister there. Since 2010, the Bach museum in Leipzig has been presenting a large exhibition on the life of Bach. The famous portrait of Bach by Elias Gottlob Haussmann – the only portrait for which Bach undoubtedly sat – can be found in Leipzig in the Museum of the History of the City of Leipzig in the Altes Rathaus. Places of interest in Thuringia associated with Bach are described at www.bach-thueringen.de.

Are there also tours to all the Bach towns?
Coach trips of this type are offered, for example, by the Mitteldeutsche Tourismus-Agentur. Two musicians even organise Bach cycling tours.

Where can I find out more about Bach in the internet?
Wikipedia is a start. A very entertaining site is: www.bachonbach.com– the site is run by Peter Bach, one of Bach’s descendants. You can find  out almost everything about Bach cantatas at www.bach-cantatas.com. There is a detailed Bach calendar at www.jsba.ch. Original sources and early musical manuscripts can be researched and viewed in high detail at www.bach-digital.de.

Where are there more museums about musicians in Germany?
Go to www.musikermuseen.de !

What else is there to do in Eisenach?
A visit to the Wartburg – “the ideal castle” (UNESCO) – is a must: think of Wagner’s Tannhauser and the minstrels’ contest, Saint Elisabeth, Martin Luther... It can be reached on foot from the Bachhaus in around 25 minutes. At the foot of the Wartburg lies the “Reuter Wagner Villa”. The poet Fritz Reuter had it built in Roman style in 1866. The original residential rooms are worth seeing – and the ground floor of the villa may be even more interesting to some, as it contains the most extensive Richard Wagner collection outside Bayreuth. The collection of medieval carved sculptures in the “Predigerkirche” (Church of the Dominicans) is unique. The Lutherhaus, renovated for the 500th jubilee of the Reformation in 2017, is presenting a completely redesigned exhibition covering, for example, Luther’s Bible translation and its impact on the world. In good weather, the Drachenschlucht (Dragon’s Gorge) is the most popular natural landmark in the vicinity.

Where is the Tourist Information Office in Eisenach?
In the Palace in the Market Square, and also at www.eisenach.info online.

How can I support your Museum?
Consider becoming a member of the Neue Bachgesellschaft, our owner and sponsor of many activities, with thousands of members around the globe! We are very grateful for donations – without donations it would be impossible to realise many of our projects. You can order items from our online shop – all proceeds go directly to us. And, most of all: If you have enjoyed your visit, you can recommend us to your friends and family!

And finally: Where do you get those delicious little Bach cakes?
The “Bach Cubes” are created by the Konditorei Brüheim directly below the Bachhaus on Frauenplan. 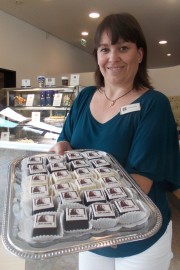